It can be very disconcerting for people who do not know Greek to look at an interlinear Bible and not see any Greek word under an English word. Are the translators adding to God’s word? Case in point is 1 Timothy 3:11 and the question as to whether Paul is speaking of deacons’ wives or deaconesses. 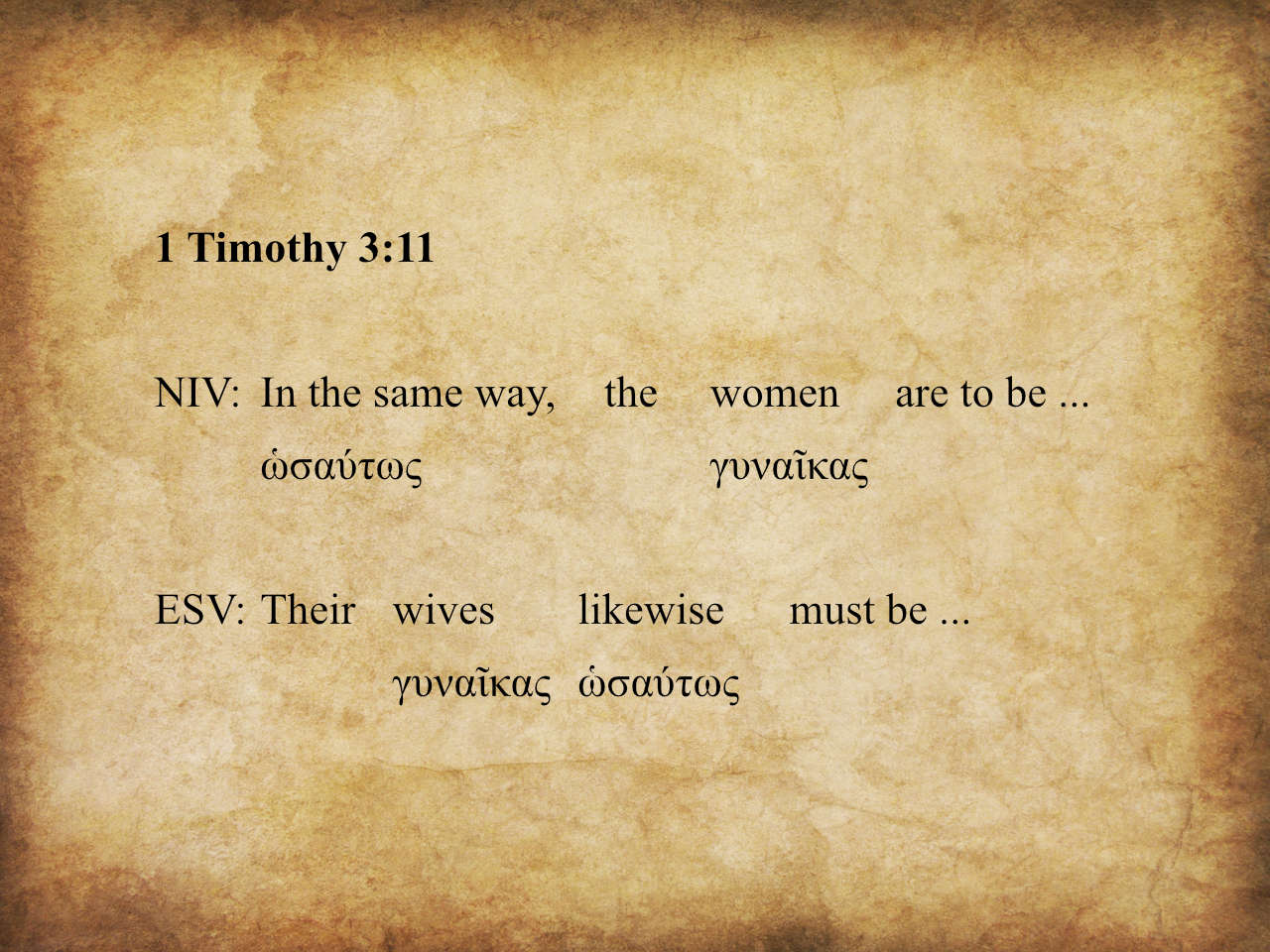 The other day I was teaching an evening seminar in my church on how to do Greek word studies. It only takes about two hours to learn the alphabet, and the concepts of inflection and semantic range. (Check out my book, Greek for the Rest of Us.) One of my illustrations was 1 Timothy 3:11 and the question as to whether Paul is talking about the deacons’ wives or female deacons. γυνή can mean both “wife” or “woman” and hence the exegetical question.

I was showing both the NIV and ESV in interlinear format. The NIV says “the women” and the ESV says “their wives.” The problem, of course, is that the Greek only says γυναῖκας, and so there is no Greek under “the” or “their.” To someone not familiar with the issues the translation, the addition struck some of the people as quite egregious.

Here are some of my introductory comments from my commentary. “Because γυνή can mean both ‘wife’ and ‘woman,’ it is not clear whether Paul is referring to the wives of deacons or to women workers, ‘deaconesses.’ The feminine form of the word διάκονος (διακόνισσα) had not yet been created. In Rom 16:1, Phoebe is called a διάκονος, the masculine form of the word. The first reference to διακόνισσα occurs in the fourth century in canon 19 of the Council of Nicea. Whatever the specific interpretation of this verse may be, it is not related to the issue of women in leadership since the deacon(ess) does not provide authoritative leadership. There is no question that women were to play a significant role in serving the church. The NT is replete with such examples, and deaconesses appear very early in church history.”

This is one of those decisions that is almost 6 of one and half a dozen of the other. I slightly favor the translation “wives.”

However, most prefer to translate γυνή as “women,” and thus believe the verse refers to women (deacons).

If you want to see the counter arguments for both positions, check out my commentary. I finally decided on the translation “wives” because one of the dominant qualifications for leadership in the church, in both 1 Timothy and Titus 1, is the person’s proven managerial abilities with people as evident in his home. I haven't changed my mind on that.

But I do think that you can’t just say “wives.” In a passage dealing with specific roles in the church, it is too awkward to simply say “wives must be ...” or “women must be....” NASB has “women” with an explanatory footnote. CSB translates “wives” with a footnote, “Or The women.” Only the NRSV has just “women,” which is the most confusing option since it would appear to refer to all the women in the church, an idea totally out of context.

By the way, for some reason I can't fully explain, I never liked the term “deaconess.” It somehow feels demeaning to separate the women from the man who are performing the same role. When I was pastoring and we were writing our bylaws, I insisted that we called both men and women “deacons” to assert the full egality of both genders. If you decide this verse is talking about deaconesses, I would encourage you to call them all “deacons,” and then let those who oppose you come up with some exegetical reason for their position. There is none, and they will argue from tradition and peoples’ false perceptions, neither of which is a valid exegetical argument.