I heard a popular preacher the other day say that he will not accept any theology that allows for suffering. All suffering, he says, is outside of God’s will and the experiences of an obedient Christian. There are few things that are more wrong than this absurdly non-biblical statement.

Phil 1:27–30 is one sentence in Greek, and the flow of Paul’s teaching is important. He begins by encouraging the Philippian Christians to “conduct yourselves in a manner worthy of the gospel of Christ,” which means that they are to be unified, that they “stand firm (στήκετε) in one spirit. στήκετε is then modified by two participles, telling them how to stand firm, by:

Paul adds that their unity “is a sign of destruction for them, but of salvation for you — and that from God.” In order to explain this, Paul moves to the point he (and I) want to make.

Translations generally are not able to bring out the nuances of this verse, nor the awkward Greek. Paul begins, “for it has been granted (ἐχαρίσθη) to you on behalf of Christ.” χαρίζομαι means “to give freely as a favor, give graciously” (BDAG). χαρίζομαι is the cognate verb for the familiar noun, χάρις, meaning “grace.” The NLT translates, “you have been given ... the privilege.” The following are gracious gifts to Christians:

The theology of the “popular pastor” denies God’s gracious gift of suffering.

Secondly, the awkward Greek. I am speculating at this point, but it appears that Paul changed his mind mid-stream, as evidenced by the extra τό. Apparently, Paul was going to say, “to you it has been graciously given on behalf of Christ to suffer for him” (ἐχαρίσθη τὸ ὑπὲρ Χριστοῦ ὑπὲρ αὐτοῦ πάσχειν; cf. 1 Thess 2:2; Phil 1:30). τὸ … πάσχειν is an articular infinitive modified by two prepositional phrases, ὑπὲρ Χριστοῦ and εἰς αὐτόν. However, it seems that Paul changed his mind, probably because he wanted to encourage them at the same time and so decided to add the phrase about God’s gracious gift of faith. It would have been nice if Paul’s amanuensis had scrapped the τό off the parchment, but he didn’t.

So with this understanding, here is the phrasing. 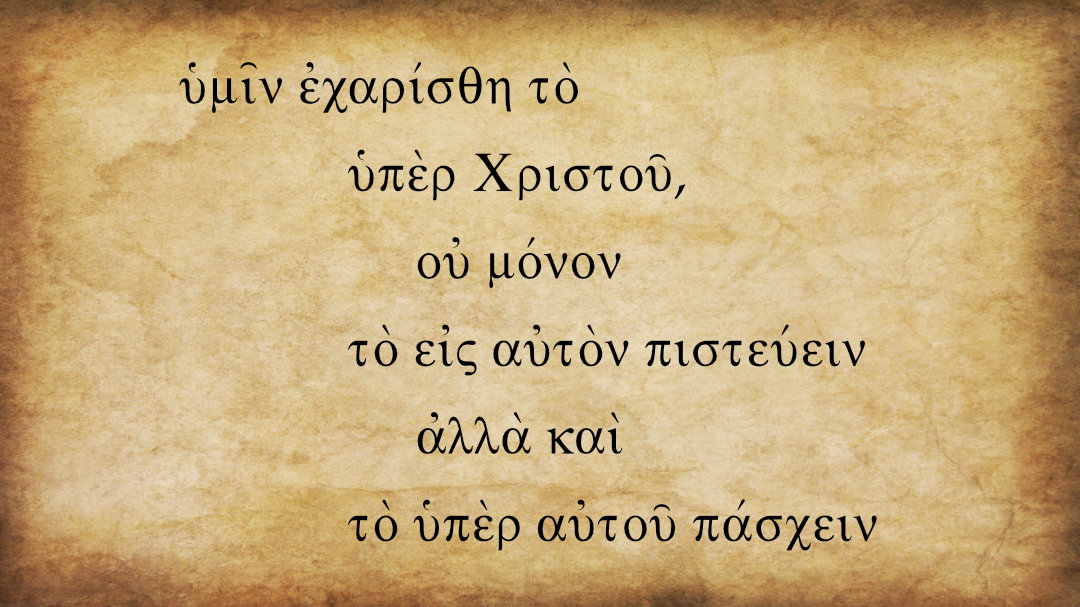 Grudem defines ”grace” as “God’s goodness toward those who deserve only punishment” (239). Not only is belief a gracious gift from God, but so also is entering into suffering on his behalf. To deny the reality and the gift of suffering is to rip out half of God’s gracious gifts to us that Paul is discussing.

I understand that we don’t tend to look forward to suffering as followers of Jesus. But our conversion necessarily puts us at odds with the world, and changed people will and must live changed lives. In fact, if we are not suffering, then we need to ask if we are living out our allegiance to Christ. Paul has just said that our separation from the world, specifically our unity in Christ, “is a sign of destruction for them, but of salvation for you” (v 28). That is how different we are to be from the world. What is a confirming sign of our true faith in Christ serves, at the same time, as a sign of judgment on the unbelieving world. Our unity in the face of persecution and suffering is a dual sign of their destruction and our salvation. But if we are not suffering, how are we different from the world?

The fact of the matter is that much of the western church knows little of suffering since we are not that different from the world. Have you heard the old saying, “If Christianity became illegal, would there be enough evidence to convict you?” We must be different. We were changed at the gate; of course we are going to live a life that is different from those on the wide-open easy street headed straight to hell (Matt 7:13–14).

Suffering for Christ is so essential that without it one’s salvation is in question. (And by the way, I am reformed in my theology.) As Paul tells the Romans, “The Spirit himself bears witness with our spirit that we are children of God, and if children, then heirs, heirs of God and fellow heirs with Christ …” And we love to stop the sentence here, but Paul doesn’t. He continues that we are God’s children, his heirs, fellow heirs with Christ, “provided we suffer with him so that we may also be glorified with him” (8:16–17, italics added). Our glorification depends on our suffering, and our suffering depends upon our willingness to be God’s special people, salt and light, standing in stark contrast to the darkness of the world.

Suffering for Christ as we live out our lives is a gracious gift from God, confirming and strengthening his gracious gift of faith to us. As Fee writes (quoting Lightfoot), “suffering should not surprise or overwhelm them; it is rather evidence that ‘God looks upon you with favor’” (171). I am convinced that if the modern church actually was unified, “standing firm in one spirit,” and if it actually did “strive side by side with one mind for the faith of the gospel,” then we would be living in sharp contrast to the world, suffer for it, and we would be joined with Christ through it.

Anyone who teaches otherwise is teaching false doctrine and is robbing God’s children of the joyful benefits of suffering.

"Suffering" needs to be defined

Submitted by Garth D. Wiebe on Tue, 2022-04-19 10:15
¶ (Note: This comment has disappeared a couple of times. I'm assuming this is merely a technical issue, perhaps because the original blog post was edited and re-posted as if new.) ¶ It is alarming that you think Paul "changed his mind" and "it would have been nice if Paul's amaneunsis had scrapped the τό off the parchment, but he didn't." This is blatantly attesting to the idea, at least implicitly, that the scriptures were merely the writings of fickle men, whereas in fact they are God-breathed (2 Tim 3:16-17), men "carried along" (φερομενοι) by the Holy Spirit (2 Pet 1:16-21). ¶ Then, back to the main subject, εχαρισθη is, as you rightly point out, the verb form of χαρις, "favor," so the verb form (aorist passive) would be "is favored" or, perhaps more loosely, "is dealt graciously concerning." There is no mention of a "gift" given, which would be the nouns δορα or δομα ("gift") or the verb διδωμι ("give" or "grant"). Perhaps you are getting that somehow from the well-worn, traditional translation for χαρισ-μα (grace-effect/manifestation/working), which is not a "spiritual gift" (which, if so, would be back-translated δομα πνευματικος). There is no "gift" or "giving" mentioned. ¶ Then, the translation of πασχειν should just be "to be having passion," at its root meaning. You know that this word is connected in a Hebrew/Israeli/Christian sense with the "passion" of the Christ, such that πασχα only refers to the Passover, so we have English transliterations of the Latin transliteration of the Greek transliteration of the Aramaic word, which is an Aramaic transliteration of the original Hebrew word, also transliterated into Greek as παθος, also transliterated into English in words like pathetic, pathology, pathogen, etc. Your post is incomplete without explaining these connections. ¶ Here's the thing: I don't know what the context was of the sermon of the "popular preacher," or who the "preacher" was, but "suffering" needs to be defined. It is too general a word. You followed the technical aspect of your post with an explanation/exposition that puts what *you* mean by "suffering" in context, which is helpful, although you go too far by making it "essential" to "one's salvation," whereas we ought to profess that salvation is by faith alone. But from that exposition we can see that you are not referring to "suffering" as in the form of God judicially punishing us (which he can't since Jesus paid for sins with his blood, justifying us), or putting some disease (like a "pathogen") on us (which he can't since Jesus paid for our afflictions, "suffering" in his body in our place for them). "Suffering" in the form of persecution or deprivation of worldly pleasures is a consequence of our faith, not an ingredient of it. The phrase, "the joyful benefits of suffering," is an oxymoron. We do not seek to experience "suffering" but, when it does come, in the form of persecution, we know the source of that. It is at the hands of men motivated by the devil, not God. It is the devil's unpleasant "gift" to us in response to our faith, obedience, and commitment to the Lord Jesus.

Submitted by GreenHat406 on Wed, 2022-09-28 15:40
Garth D. Wiebe, I think there is nuance missing in your understanding of suffering. First, You stated ''The phrase, "the joyful benefits of suffering," is an oxymoron.'' Your statement is incongruent with passages like Hebrews 12:2 ''For the joy set before him he endured the cross'' This clearly speaks against your point, for it says that Jesus endured the cross for the Joy set before him (meaning the joyful benefits to come). Additionally, When Jesus is praying before going to the cross, He askes God the Father to remove the Cup (of suffering) in Luke 22:42. Jesus ends by saying ''not my will but yours be done'' so the fact that Jesus suffered means that it was within the Fathers will for that to happen. Yes it happened at the hands of sinful men, however, the wrath poured out was Gods just punishment for our sin. I think those are important points to keep in mind when discussing this issue. additionally, your talk of transliteration undermines the word of God as if He isn't able to preserve His word.