There are quite a few exegetical difficulties in 1 John 1:1, starting with why the initial relative clauses are introduced with a neuter relative pronoun. 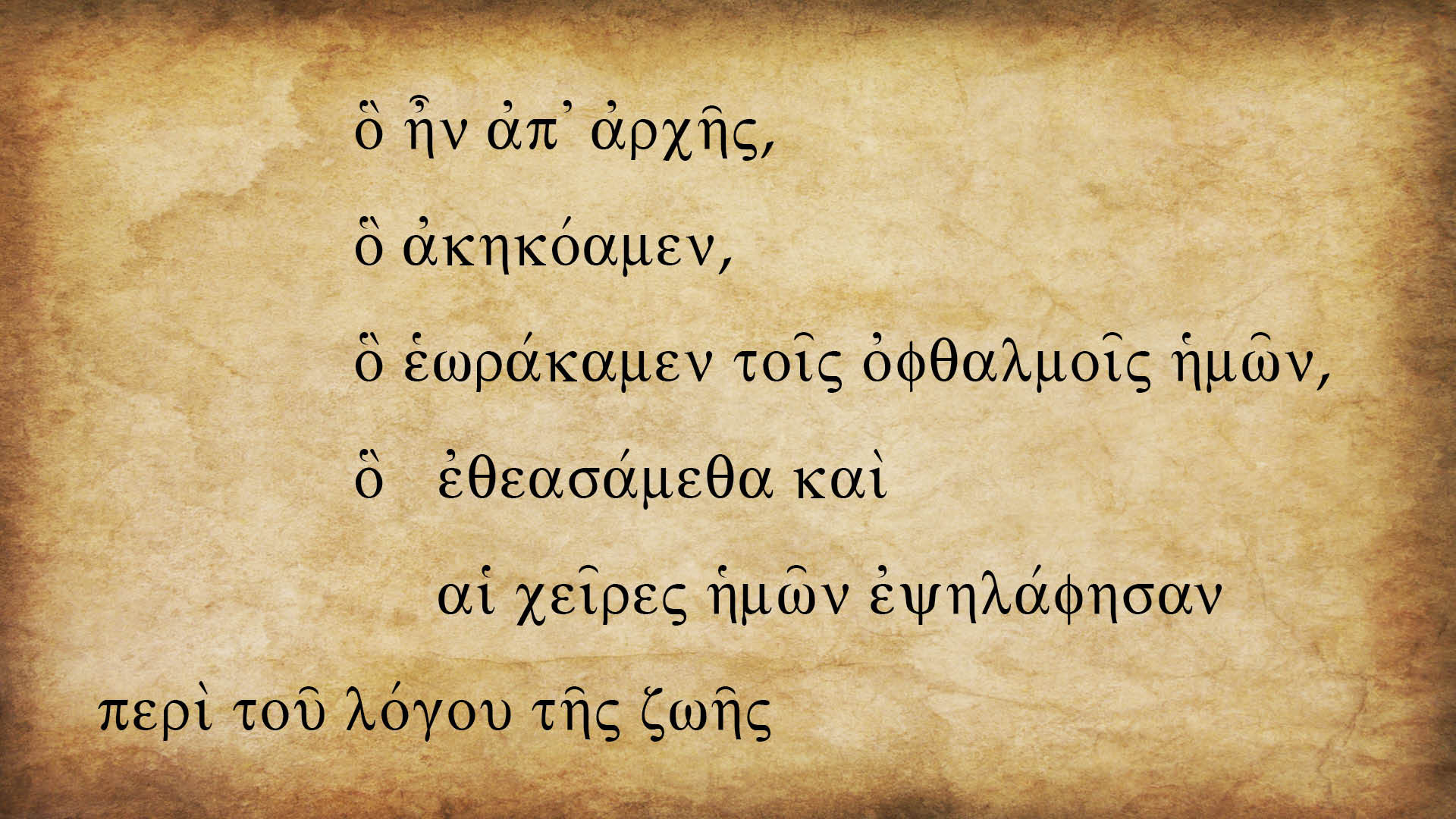 John starts with a series of relative clauses introduced by a neuter pronoun followed by a prepositional phrase:

V 3 summarizes v 1 (ὃ ἑωράκαμεν καὶ ἀκηκόαμεν) and we finally get to the verb (ἀπαγγέλλομεν) and the indirect object (ὑμῖν). (I wonder if John is German, putting the verb at the end of a convoluted sentence? Not really.) So the relative clauses in v 1 and v 3 are the direct objects of ἀπαγγέλλομεν.

In English order, it would have read ἀπαγγέλλομεν καὶ ὑμῖν ὃ ἦν ἀπʼ ἀρχῆς ..., “We announce also to you what was from the beginning.”

So why are the pronouns neuter? Part of the answer is wrapped up in the identify of τοῦ λόγου τῆς ζωῆς. λόγου could be the message of Jesus, the Gospel, or it could be Jesus himself, the pre-existent Word (John 1:1).

Despite the fact that λόγου is masculine, the pronouns are neuter, probably following natural gender because they are initially referring to the message of the gospel. But since the message of the λόγου is intimately tied in with the person of Jesus, someone they could hear (ἀκηκόαμεν), see (ἑωράκαμεν, ἐθεασάμεθα), and touch (ἐψηλάφησαν), the neuter ὅ must also include the personal Jesus

The other way to view v 1 is as a sentence fragment that you have to end with a dash.  I suspect John expects us to see v 1 and v 3 as part of the same sentence with v 2 being an interjection.

In first year Greek we tend to teach specific rules, such as the gender of the pronoun is determined by the gender of its antecedent. But grammar can be broken to make a point. Again, I suspect that the pronouns are neuter and not masculine (agreeing with λόγου) so the reader will understand they refer to more than just a message.

Jesus is the gospel.

Submitted by Garth D. Wiebe on Mon, 2023-01-23 10:37
You view them as pronouns because of an English language mindset. When I read them, I view them as definite articles referring to the verbs: "The has been being from origin, the we have heard...the we have seen...the we gaze...concerning the word of the life." The reason they are neuter is that they refer to the actions of the verbs, not any of the nouns. I'd say John is neither "German" nor an Englishman speaking "convoluted" English grammar. It just appears so to us as Englishmen.

Submitted by Garth D. Wiebe on Mon, 2023-01-23 18:04
By the way, I understand that it is a definite relative pronoun (which/that), not a definite article (the). The problem is that if I use "which" then the English mind wants to know the noun or noun phrase that it is referring to or substituting for ("Which what?"), and I'd like to use "that," but then the English mind will interpret "that" as the English conjunction instead of the definite relative pronoun "that." What I am saying is that it functions as a definite article modifying the verb phrase. Another way to translate it might be to change the verbs into participles to make it work in English: "The having been being from origin, the having heard by us...the having seen by us...the gazing by us...concerning the word of the life." Now it is correct English grammar (although still awkward).

I don't think they can be

I've been reconsidering what

Submitted by Garth D. Wiebe on Mon, 2023-01-30 09:08
I've been reconsidering what I said about this (not in reference to your comment about the τ -- I was not saying that it should be parsed as a neuter definite article, only that it should be thought of like one). I've concluded it does indeed work best as simply a definite relative pronoun after all. I will continue beating my drum of the fallacy of reading Greek with an English language mindset, but in this case I jumped the gun and this was just not a good example of that. So, you are right and I am wrong here. As you originally posted, the pronouns' antecedent is the λογος / λογου της ζωης, the objects of απαγγελλομεν, "which" John speaks of, an abstraction of a principle who is Jesus.

Submitted by Kevin Rogers on Mon, 2023-01-23 14:59
Verse 1 has 'we have seen' (ἑωράκαμεν) and we have gazed upon (ἐθεασάμεθα). What is the difference? and why is the first active and the second is perfect? I like the Holman Christian Standard Bible translation. It itemizes each relative clause to highlight the dramatic claims of empirical witness testimony, but I would prefer it used 'that which' rather than 'what'..

I think there must be a

Submitted by admin on Wed, 2023-01-25 21:21
I think there must be a difference or else it is redundant. The second very has more the idea of gazing on and not just seeing something.