Dynamic equivalent translations are not overly concerned with concordance, i.e., translating the same Greek word with the same English word. But if it is possible to find the right English word that matches all the different uses of the Greek word, it can be a good thing. Yet that task can be more difficult than you might think. And the Greek of Acts 7:19 is a bit treacherous. 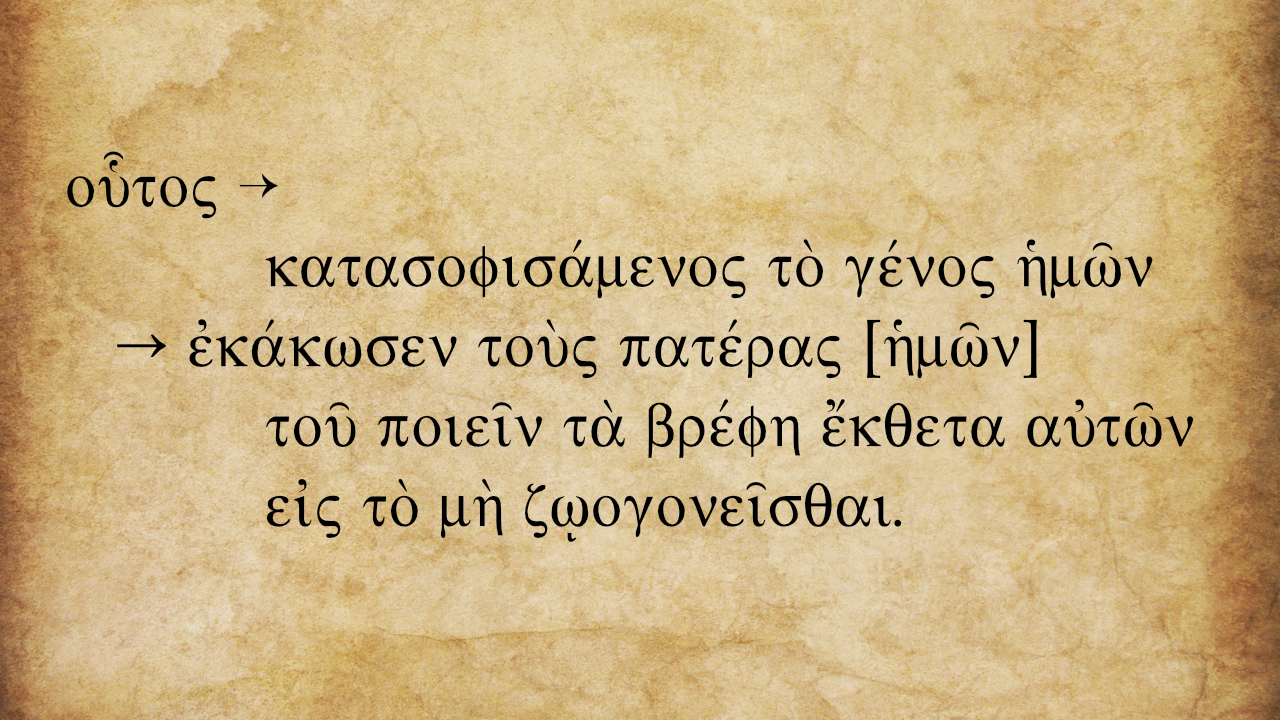 Dynamic equivalent translations are not overly concerned with concordance, i.e., translating the same Greek word with the same English word. But if it is possible to find the right English word that matches all the different uses of the Greek word, it can be a good thing. And yet that task can be more difficult than you might think.

In Acts 7:19, Luke writes that the Egyptian king “dealt treacherously with our people and oppressed our ancestors by forcing them to throw out (ἔκθετα) their newborn babies so that they would die.” ἔκθετος technically means, “to expose, abandon” (BDAG) and was the standard term for infanticide. The problem with “expose” is that many people, especially from those cultures that do not practice infanticide, may not understand what you were saying.

(To be safe, I should add that all cultures practice some form of infanticide, but not always by exposing the child to the elements.)

Some translations go with “expose” (NASB, ESV) while others use “abandon” (CSB, NRSV, NET, NLT). The NIV has “throw out,” and the KJV has “cast out.”

The problem of course is that Moses was not exposed or thrown out. He was placed in a makeshift boat and watched over by his big sister. And to make it even more difficult, you will need to use the same translation in verse 21. “When he was placed outside (ἐκτεθέντος), Pharaoh’s daughter took him and brought him up as her own son” (NIV). ἐκτίθημι means to “withdraw support or protection from, expose, abandon” (BDAG), again, often used for infanticide.

“Expose” sounds too formal and isn’t accurate to the historical situation, and neither is “thrown out.” So “abandon” will have to do.

Aw, the joys of proper Greek.