One of the ongoing attacks on modern translations has to do with the Trinitarian formula in 1 John 5:7–8. The accusation is that modern translators are dropping out the divinity of Christ from the Bible. I’ve now actually seen the factual evidence of why this is not true. 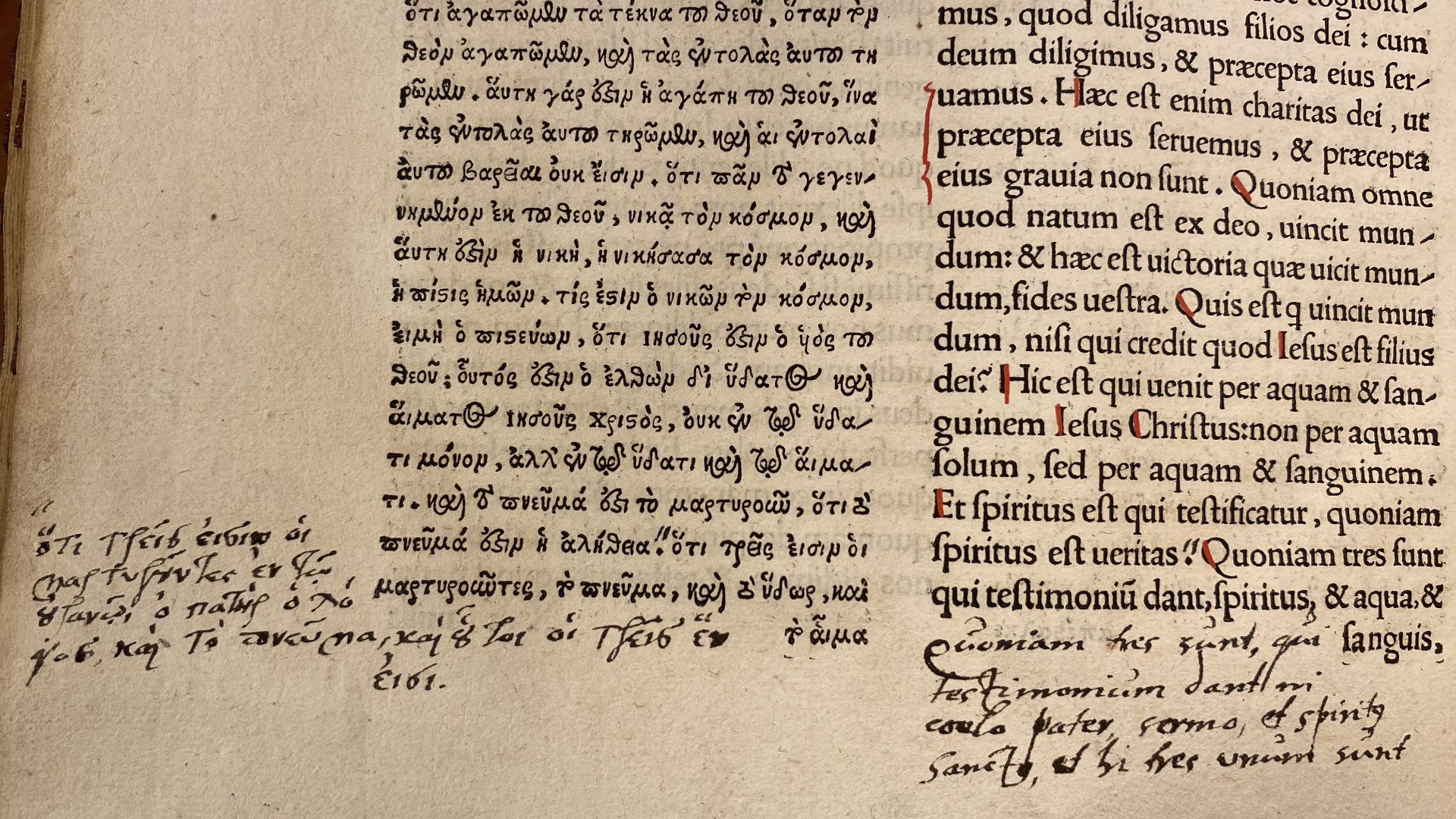 Both images are copyright, Dunham Bible Museum, used with permission.

It is one of those charges that no matter how many times it is refuted — and it is easy to refute — the charges continue to circulate. I was in the manuscript library at Houston Baptist University this past weekend, the Dunham Bible Museum, and I was actually able to hold a second and third edition of Erasmus’ Greek text, page through it, and take pictures (without flash).

I checked out the longer ending of Mark (16:9–20), the pericope of the Woman Caught in Adultery (John 7:53–8:11, which is the worst name for a pericope in the Bible since the man was caught as well), and then went to 1 John 5 to check out the Comma Johanneum, as it is called. The words in italics below were added centuries after John wrote the epistle. The words are in the footnotes of the NIV, NASB, CSB, NET, and NLT (surprisingly not in the ESV or NRSV) but present in the KJV.

So how did these words get into the Bible? Erasmus clearly states that they were not original, but due to church pressure he added them from a suspected forged Greek manuscript in his third edition of the Greek New Testament. This edition was basically the basis for the KJV.

And this takes me back to the Dunham Bible Museum. As you can see from the picture above, somebody wrote the formula into the margin of the second edition, and it was moved into the text of the third edition (see below). 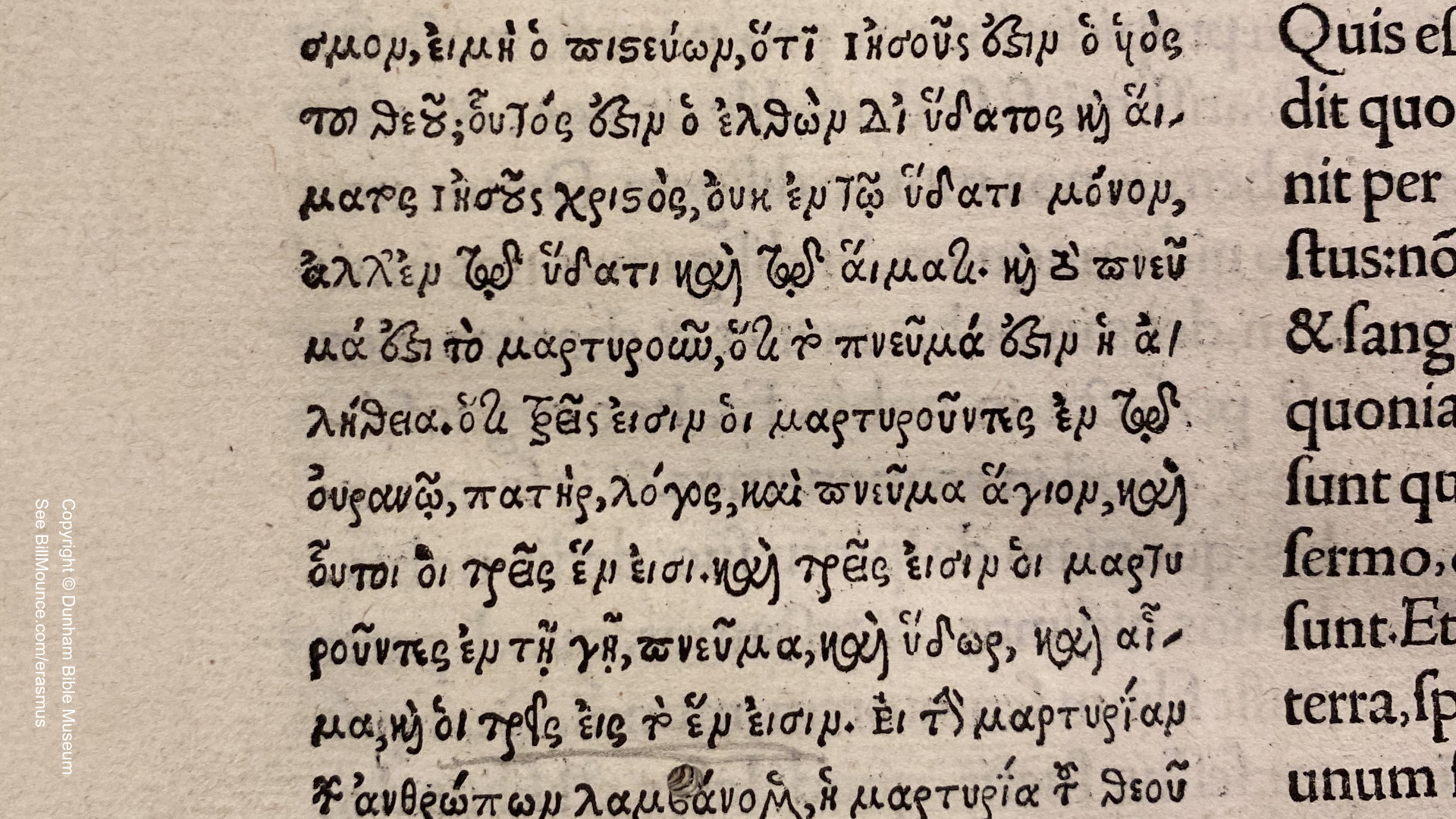 Modern Bibles do not leave the verse out; a few of the Greek texts behind the King James added them in. If it is wrong to subtract from God’s Word (and it is), so also it is wrong to add to God’s word. If we are going to criticize Bible translations, let’s do it accurately, with grace, knowing that all major Bible translations will lead you to the cross, and none will lead you to heresy.

Thanks for sharing this

Submitted by Aaron Quilliams on Sun, 2020-03-22 13:40
Thanks for the sharing. Very useful information for my church to know

Submitted by Thomas Christian on Mon, 2020-04-06 11:34
Nice! Thank you for this gem. One thing is clear, most manuscript copyist did their jobs and copied the source text (to the best of their abilities) exactly as it was written. Sadly, as time progressed some manuscript copyist altered manuscripts for theological reasons. This tampering was due to a low view of Scripture. If copyists believe that the original autographs from the Biblical authors was inspired by God and without error, meaning nothing was contrary to fact, then copyist would never have tampered with changing manuscript copies. I personally believe what we are seeing in modern translations is a high view of Scripture and a fortitude to not let theological pressure, gossip and banter direct how a translation should read. It is an untenable position to argue or conject that tampered manuscript copies should take precedents over older and more reliable manuscripts unless you hold a low view of Scripture. Let’s be gracious with one another, take the time to understand the issues and lovingly agree that a high view of Scripture is the best approach for us today and future generations of believers.

Submitted by William A Diehl on Wed, 2021-10-20 11:35
Hi Brother Mounce, I just want to point out that Bengel's commentary on 1 John 5:7-8 has taken the position that the KJV is correct in its inclusion of the phrase, "For there are three that bear record in heaven, the Father, the Word, and the Holy Ghost: and these three are one." Here is the link to the commentary: https://biblehub.com/commentaries/bengel/1_john/5.htm . We here at www.PresentTruthMag.org have looked at both positions and tend to agree with Bengel, but we remain open to further investigation. Thanks for your great web site. Bill Diehl, editor www.PresentTruthMag.org Fallbrook, Ca