Many people do not use certain gender terms properly, which creates confusion in the discussion of translation theory. What is “gender neutral,” “gender inclusive,” and “gender accurate"? Why is this even an issue? 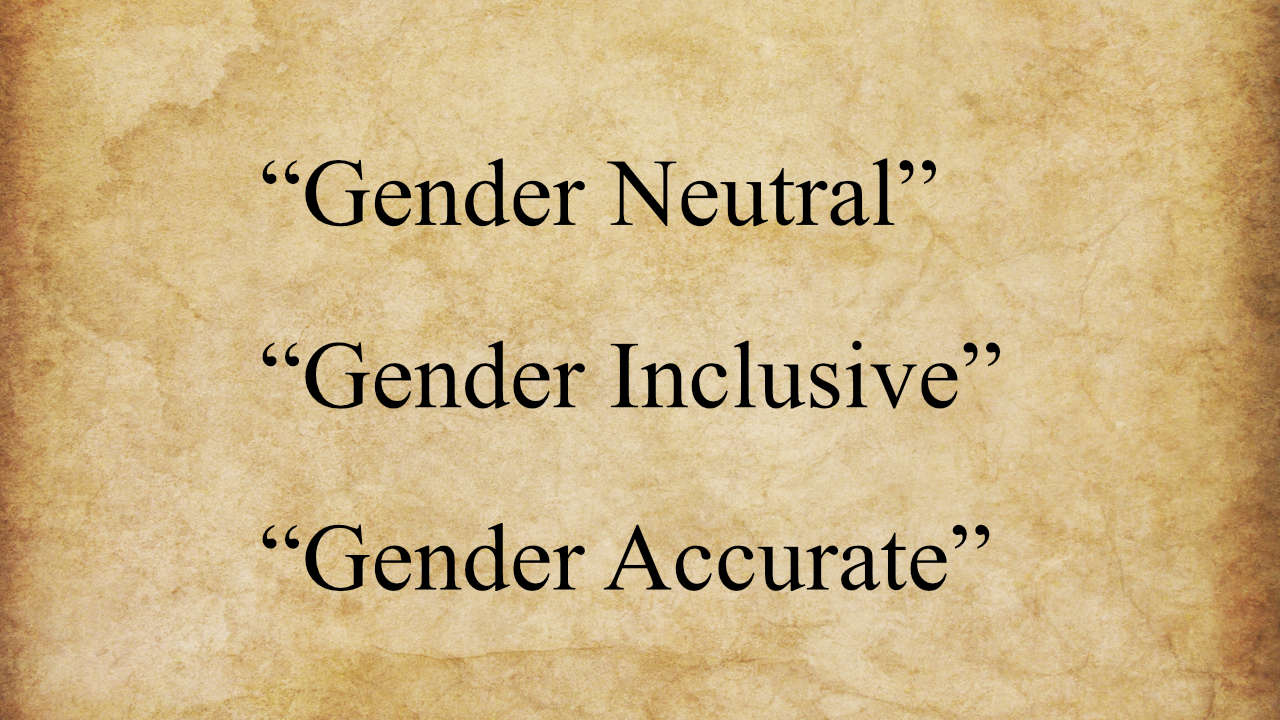 There are Challenges in Writing for a Broadly English Audience. I am a white, middle-aged male, raised in Minnesota, Kentucky, and California. I was born into an educated family with minimal influence from the secular world; the first movie I ever saw was the cartoon Bambi when I was 16 years old. Many family dinner conversations were about the meanings of words: dad liked to read through the dictionary and challenge us with his latest word. (My favorite was “arglebargle.”) I enjoyed school, and stayed within the walls of the academy from my years in a private high school, through university, seminary, and graduate school. And then I taught at university and seminary. It is within this cultural context that I understand words and grammar and meaning. But not everyone is like me.

One of the things I enjoy on the CBT translation committee is working with fourteen other people—men and women from different continents and in some cases significantly different backgrounds. The fact is that we often hear words differently. Doug Moo tells the story of a discussion over the translation of erēmos as “wilderness” or “desert,” and Ken Barker’s objection that “wilderness” is a heavily wooded area. Ken was raised in the hills of eastern Kentucky and hears the word decidedly differently than I do; I was raised in western Kentucky.

I still smile when I think back to my first days in Scotland as I was headed to begin my Ph.D. studies in Aberdeen. I asked the conductor on the train where the bathroom was, and he responded (without smiling), “Why? Do you want to take a bath?” Obviously, we were having a failure to communicate. It is challenging to translate for a worldwide audience.

I am reminded of how the word “deacon” means decidedly different things depending on whether you are from the northern or the southern part of the United States. In the north, a deacon is closer to being a trustee and takes care of the building and grounds. In the south, however, historically preachers went from church to church, and the deacons ran the church when the preacher was not present. So, is Phoebe a “servant” or a “deacon” (diakonos) in the church in Cenchreae (Romans 16:1)? “Deacon” means decidedly different things depending on one’s cultural and geographic background.

There is where we meet the whole issue of gender language. For some people, “man” and “he” are still understood generically, referring to men and women alike. But for many others, “man” and “he” only mean “male.” We may not like this; we may think it should be different, going back in time. But it is a fact that many people do not hear “man” and “he” generically, and saying “man” and “he” will make it difficult for them to clearly hear the message of the Bible. Remember, grammar is descriptive as well as prescriptive; to insist that language not change is naive.

I will never forget walking into my daughter’s bedroom when she was 8 years old. Kiersten had copied a verse out of the Bible, pinned it to her bulletin board, had crossed out “he” and wrote “she.” After I complimented her on her desire to read and memorize the Bible, I asked why the alteration. I will never forget her innocent response: “The Bible is for me too and not just Tyler, isn’t it?” (Tyler is her big brother.)

We are also in the middle of a sea change in language where the pronoun “they” is becoming unmarked for number and can therefore refer to one or more than one. Many people decry this, but this is what is happening to English. “They” was not marked for number in Elizabethan English (check out Shakespeare), and the “indefinite they” is coming back in vogue.

Since the issue of gender language is front and center these days, let’s be sure we are using the words properly; there is frequent misunderstanding about the meaning of these three gender terms. I have learned that they are rarely used accurately, especially in the blogosphere.

This kind of translation seeks to neutralize or eliminate gender-specific references as much as possible. “Parent” would be used instead of “father,” “ancestor” for “forefather,” “child” for “son,” and “person” for “man” without regard for the actual referent. When my daughter writes a bio about herself for a Ph.D. symposium, she has to refer to herself as “they.” My daughter is a female person, but she cannot refer to herself as “she.” This is being gender neutral. I am not aware of any translation that intentionally does this.

Having said that, I might add that it can be the consequence of using plurals and even sometimes the second person for a third person singular construction. Consider Mark 8:35.

The shift to the plural in the NRSV certainly lessens the force of Jesus’ words and sounds like a group project with the use of “those.” The use of second person by the NLT works pretty well here.

This is the more common term used with reference to gender language in translation, yet it can be vague and misleading.  A “gender inclusive” version would make everything inclusive, whether the original makes gender specific statements or not. So biblical statements about men would consistently be translated as if they were referring to both men and women.  The only translation that may do this is the NRSV when, for example, it changes “father” to “parent” (see Prov 29:3).

These are translations that intentionally clarify gender.  They refer to “men” using male language, “women” using female language, and use inclusive terms when referring to both men and women. Their goal is to be accurate and specific with reference to gender. Most modern translations do this, but let me make four points.

a. Where the translations differ is on the pronouns used to refer back to an indefinite noun or pronoun (e.g., “person,” “someone,” “anyone”). The ESV and CSB will refer back to an antecedent such as “anyone” with the anaphoric “he.” The NIV often uses singular “they.” The NRSV has other ways such as using plurals or second person.

Psalm 1 begins, “Blessed is the one who does not walk in step with the wicked …. That person is like a tree planted by streams of water” (NIV). The CSB begins verse 3, “He is like” (also ESV, NET, KJV). The NLT says “They” (also NRSV).

b. Another decision all translators have to make is how to handle references to a male when that male stands as a representative for men and women. Proverbs 3:11–12 is the classic passage. “My son, do not despise the Lord’s discipline, and do not resent his rebuke, because the Lord disciplines those he loves, as a father the son he delights in” (NIV). This preserves a classic form of wisdom literature, and the expectation is that the reader will understand that what is true of the son is also true of the daughter. Compare this to the NLT: “My child, don’t reject the Lord’s discipline, and don’t be upset when he corrects you. For the Lord corrects those he loves, just as a father corrects a child in whom he delights.”

c. The third situation affected by gender issues is the translation of adelfos, previously translated “brother.” The CSB translates Matthew 18:16 as, “If your brother sins against you, go and rebuke him in private.” With whom do we have to reconcile—only our male Christian friends or all our Christian friends? It depends (at one level) on whether you hear “brother” as “male” or as “fellow believer.” The NIV reads, “If your brother or sister sins, go and point out their fault, just between the two of you.

d. The related word is anthrōpos. Should we translate it as “men,” or with words that mean “men and women”? The NIV is committed to using broadly understood English, and by “broad” I mean world-wide. After all, it is the New International Version. This commitment controls much of the language the CBT chooses, including our preferred gender-accurate terms. The members of the translation team all hear things slightly differently, and it is in the discussion that we come to understand each other and settle on a translation that can be understood across the continents.

English is in a constant state of flux, as are most languages. This includes not only gender language but also things like the demise of the subjunctive and the predicate nominative, changes I decry. I like the difference between “may” and “can,” and I answer the phone “It is I,” but those differences are going away, like it or not. But I do enjoy the acceptance of contractions, even in formal writing.

This is one of the reasons why the CBT was originally formed with the mandate to meet every year and keep the NIV up-to-date with current English and biblical scholarship. We are the only translation team to do so; and while it means your favorite verse may get changed, it also means that your favorite verse will be kept current with the English spoken around the world.

Translating for a large swath of people, and not just a certain physical locale, has been a learning experience.