There are times when the biblical text is ambiguous and the translator must interpret, and the decision makes a real difference in understanding and applying the verse. Case in point is 1 Tim 5:5 and our understanding of the widow the church should care for. 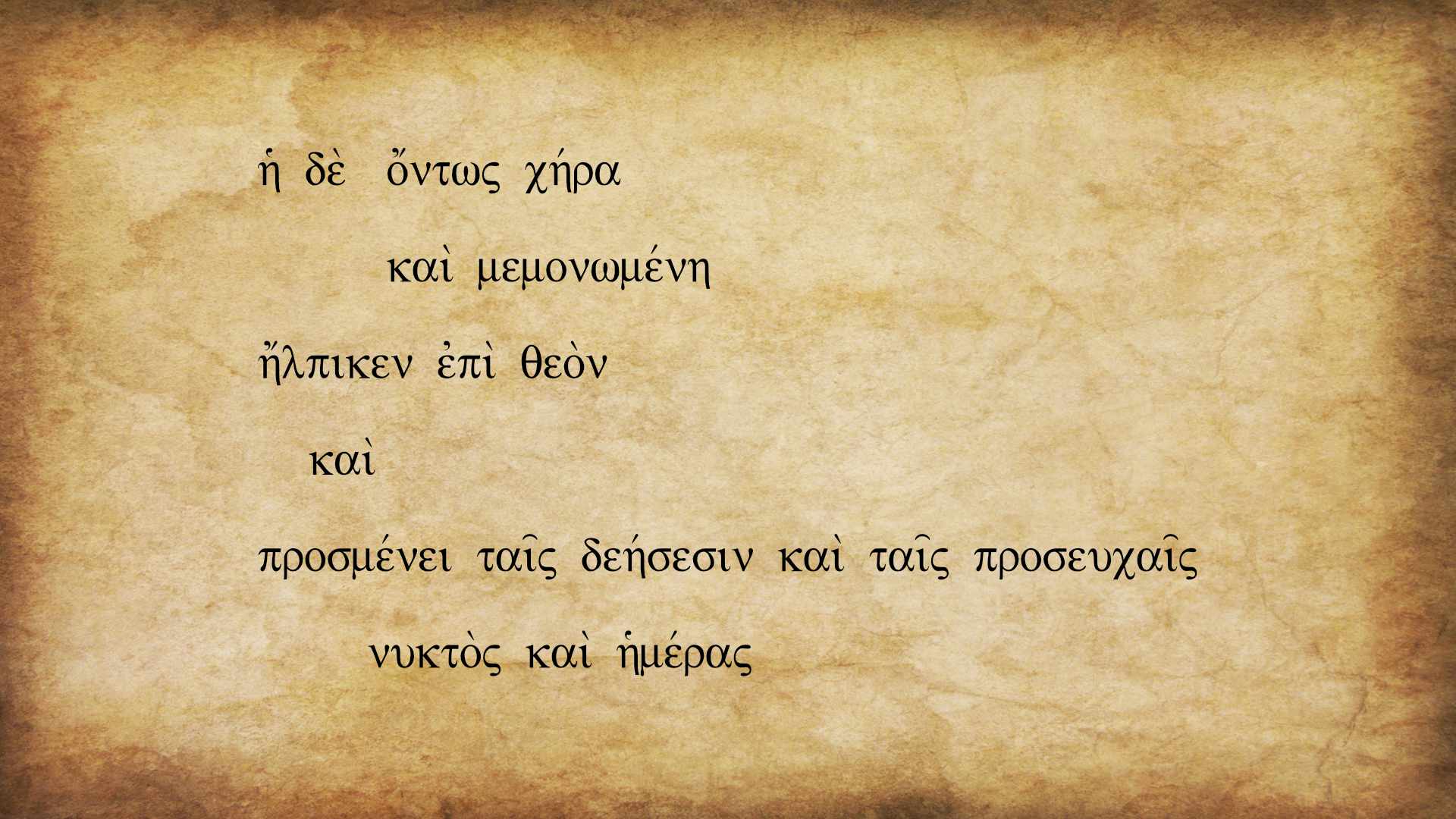 Paul begins with his thesis statement: “Honor widows who are truly widows (χήρας τίμα τὰς ὄντως χήρας.)” (1 Tim 5:3, repeated in v 5 and v 16). “Honor” includes both the idea of respect and also financial support (see my commentary for argumentation). The thrust of the passage is that the church is obligated to care for windows who “qualify,” but how do they qualify?

It is an important question since widows who have “enrolled” (v 11) were to receive ongoing financial support, and the church had limited funds to do so. Not just any widow was to be enrolled. While v 3 is the thesis statement, it needs the following verses to define what Paul means.

A word-for-word translation is of little help. “Honor widows who are widows indeed” (NASB) is meaningless at best (also ESV, NRSV). Is the church to honor women whose husbands are truly dead (as opposed to faking it)? Note my sarcasm. The CSB reads, “Support widows who are genuinely in need.”

The key is the καί in v 5. “But the true widow (ὄντως χήρα), (καί) who has been left totally alone (μεμονωμένη), has set her hope on God (ἤλπικεν ἐπὶ θεόν) and continues in entreaties and prayers night and day.” If you read the καί as a regular “and,” you end up with three qualifications. “Now she who is a widow indeed and who has been left alone, has fixed her hope on God” (NASB, also NIV). She truly has to be a widow (whatever that means), she must have no other means of support (a theme repeated throughout the passage), and she has to be godly (another theme throughout the passage).

The ESV properly sees that the καί is epexegetical (also NRSV, NLT), the second phrase defining the first, and translates the conjunction with a comma. “She who is truly a widow, (καί) left all alone, has set her hope on God.” A woman who is truly a widow is one who has been left alone, without any family for support (vv  4,8,16). The second qualification is that she must have a proven history of being a godly woman (vv 9–10).

But the Greek gives one other clue that is often lost in translation. “Who has been left totally alone” is a dependent participle (μεμονωμένη), and “set her hope” is indicative (ἤλπικεν). I know that in English we tend to turn this construction into two indicatives, but μεμονωμένη is grammatically dependent on ἤλπικεν, and I think that is significant. The main point is not that she is alone, but that she is a godly woman who is also alone. The emphasis is on her character; at least that is how I treat “dependent ... independent” constructions in general.

How wonderful it must be to be in a church where the truly vulnerable are cared for, that godly windows without families are cared for, not just financially but relationally. When I was pastoring, I argued that the health of the church could be seen in how we treated the vulnerable: widows, children, immigrants (in our case). Numbers had little to do with spiritual health, and budget shows a church’s true priorities.

Submitted by Garth D. Wiebe on Tue, 2020-12-01 08:30
¶ I think one way to resolve the 1 Tim 5:3 dilemma you have brought up multiple times (most recently on June 8), "Is a widow really a widow?" is in a couple of etymological points. The adverb οντως is just the adverb form of the verb "to be," specifically, a modification of the present participle οντας (present, accusative, plural, although masculine, but an adverb does not have gender, so it would be based on the masculine form). So, if you render it as "being-ly" it makes more sense: "Be valuing widows, the being-ly widows." In other words, what is her current situation? ¶ Next, it helps just a tiny bit more to consider that, etymologically, χηρα comes from the root meaning of "a space," implying that this is a "separated" woman. So, this introduces the fact that one may label a woman as a widow (having been "spaced" off from her husband, the only legitimate way a woman could -- see Rom 7:2), but that he is going to clarify (in context, as you rightly point out) who qualifies as such in terms of how they are treated. ¶ One more point worth adding to the last point, and this would need to be verified by a Greek classics scholar, which I am not, but there is a question in my mind whether χηρα would have always, categorically, been viewed, especially among the gentiles, as a bereaved (through death of husband) woman, given the etymological root concept would not necessarily mean that. Could the gentiles have had "widows" who were not really what we, in Jewish-Christian definition, would legitimately call "widows"? ¶ On the verse 5 point and the subject of the post, after reading και so many times, I have come to mentally start with the mental translation "and-also." It always works. In English we have the correlating conjunction "and," and then the adverb "also." But there is just one Greek word that seems so often to have more of a copulative sense, connecting the two things together, rather than in English where "and" can just paste together two random thoughts, (e.g. "I am a widower and I like chocolate."). ¶ Then, on verse 5, you mention the participle μενονωμενη, and I think it is worth explicitly highlighting that it is in the perfect tense, hyper-literally, "having been only-ed." ¶ Then, on verse 5, note that the roots of μενονωμενη and προσμενει are related! Is this being lost in the English as well? You could, awkwardly, translate the latter as "is-only-ing-toward"! That would semantically tie those two clauses, separated by the next και, together. ¶ Finally, putting my points about verse 3 and 5 together, the same thing happens in verse 5 as 3: "Be valuing widows, the being-ly widows...Yet the being-ly widow and-also having been only-ed has expected upon the God and-also is-only-ing-toward the petitions and-also to-the prayers of-night and-also of-day." That's a very awkward, improper English translation on my part but, to me at least, it is unambiguous.

the care of widows

Submitted by PRingle on Tue, 2020-12-01 10:08
More question (for another article perhaps) than comment: Comparing Paul in 1Tim 5 to James (1:27) would James be speaking of a broader group of 'qualified' widows and care of a more episodic nature than your explanation of Paul's meaning? What should that look like in today's culture by today's church? And with government 'welfare', how should the church be honoring both the widows and God's original intent/purposes?

the care of widows

Submitted by Darcy Van Horn on Tue, 2020-12-01 18:15
Appreciate your insights, Dr. Mounce. Had to chuckle though at the typo: it is important that the church care for godly 'windows'!