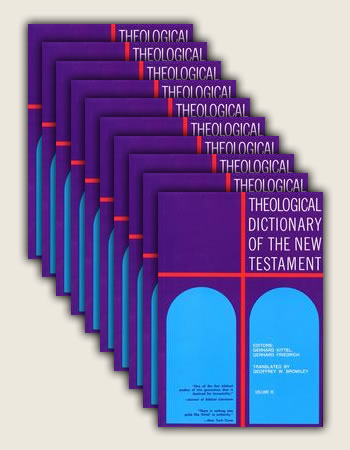 Written by: Frederick W. Danker, Walter Bauer, and others

TDNT is an authorized and unabridged translation of Theologisches Worterbuch zum Neuen Testament. This work was first published in the German edition in 1933. It is designed for the intermediate and advanced Greek student. Each significant Greek word of the New Testament is generally presented in its secular Greek background; its role in the Old Testament (both in the Hebrew and the Septuagint); its use by Philo, Josephus, the rabbinical literature; its uses in the New Testament, which is sometimes classified according to synoptic, Johannine, Petrine and Pauline usage; and sometimes the Apostolic Fathers are included as well.

TDNT (or simply, Kittel, has long been the standard for serious word studies. The entries are voluminous, at times exhausting. Written by first class German scholars (and translated into English), these books will give you the most detailed explanation of a word. If you are a serious layperson or pastor, there is usually more information than you could possibly use, and perhaps Bromiley’s abridgement would be better. But if you are a MDiv or Ph.D. student, you will want these.

But beware of a common charge leveled against the series. Just because a word had a specific meaning in 500 B.C. does not mean this is how Paul uses the word in the New Testament. Use the histroical data with great care. Also beware of the theological bias of many of the writers; they were not generally evangelical