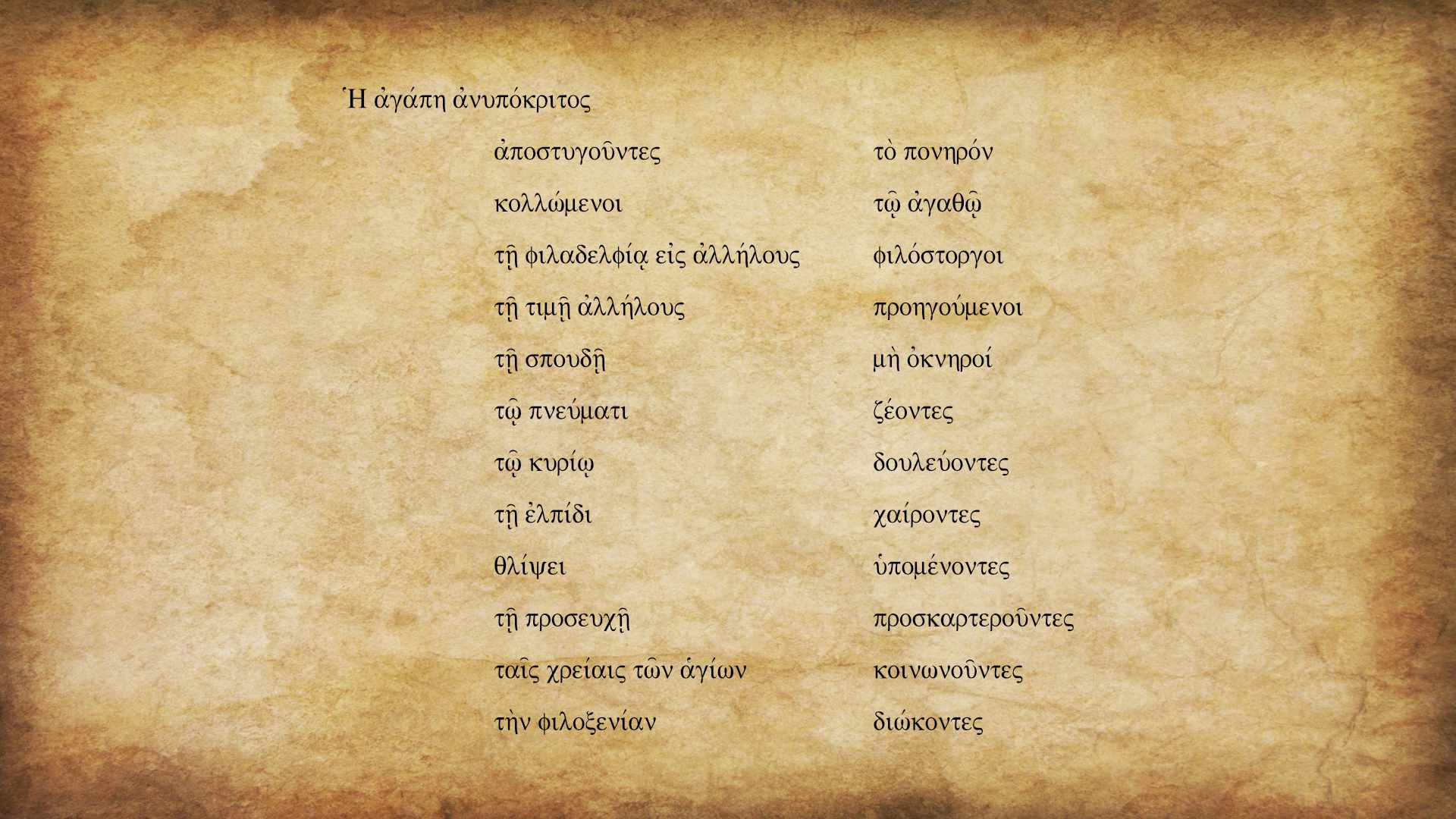 If you just read English, you would assume they are a series of relatively unrelated exhortations. After all, that’s how the verses are generally translated. For example:

Let love be genuine. Abhor what is evil; hold fast to what is good. Love one another with brotherly affection; outdo one another in showing honor; do not lag in zeal; be enthusiastic in spirit; serve the Lord; rejoice in hope, be patient in suffering, devote yourself to prayer; contribute to the needs of the saints, seek to show hospitality.

The semicolons in my translation above are an attempt to hold the passage together, and perhaps the period after “good” should also be a semicolon. Why? Because vv 9–13 are one long sentence in Greek -— regardless of the punctuation of the Greek text, which has a period after “genuine” (ἀνυπόκριτος), and regardless of the punctuation of most English translations. The ESV breaks the passage down into seven sentences, mostly following the versification.

If you check my phrasing above, you can see the issue.

It seems to me that the first phrase, “Let love be genuine,” stands as the heading for the paragraph, and the fact that it is followed by two participles must, in my opinion, mean they are qualifiers of what it means to have genuine love. Genuine love abhors evil and holds fast to the good.

Because v 10 starts with the same construction as v 9 — no verb — it could be that it is Paul’s way of breaking the flow and beginning a series of exhortations that are not as tightly tied to defining genuine love as is v 9b. This is why I wouldn’t but a colon after “genuine” and a semicolon after “god.”

Nevertheless, the remaining exhortations are all expressions of love for the other person. We talk so much today about “love,” especially in our modern worship songs, but here is a concrete list of what love looks like. Perhaps we should take some time and self-evaluate if our love is truly genuine. And if not, then our prayer is that we:

But why start with verse 9?

Submitted by Garth D. Wiebe on Mon, 2021-05-17 17:35
But there is a whole series of participial phrases before it as well. Why did you start with the one about "love"? The last indicative verb was in verse 5: "Thus, the many, one body we are being in Christ...." Everything after that is a series of phrases including participles: "[6] Having grace-effects according to the grace, the being given to us..." after which is a traditional "list" of seven things that people bracket as if an itemized and bounded list (about prophecy, teaching, serving, exhortation, generosity, leadership, mercy). So, I think you are following that doctrinal tradition. Why not just view verse nine as a continuation of them? "...the sharing in generosity, the presiding in diligence, the being-merciful in gladness, the love unfeigned, abhorring the wicked, clinging to the good..."

Submitted by matthewhadwen on Mon, 2021-05-24 13:03
Perhaps the biblical context of verse 9 is the surety in Jesus Christ (Hebrews 10) of a sacrifice acceptable to God by faith and not according to the Law. (Romans 12:1). Love that is from a pure heart does not seek gain; it is a love "unfeigned"or with dissimilutude. What Jesus seems to establish through his sacrifice for a believing heart is a sacrifice of mercy and not a false "sacrifice" of hypocrisy. (Matthew 12:7) Paul unites us all to the call to offer ourselves, like Jesus Christ, in the body so that love becomes part of his forgiving grace and is an act of worship.